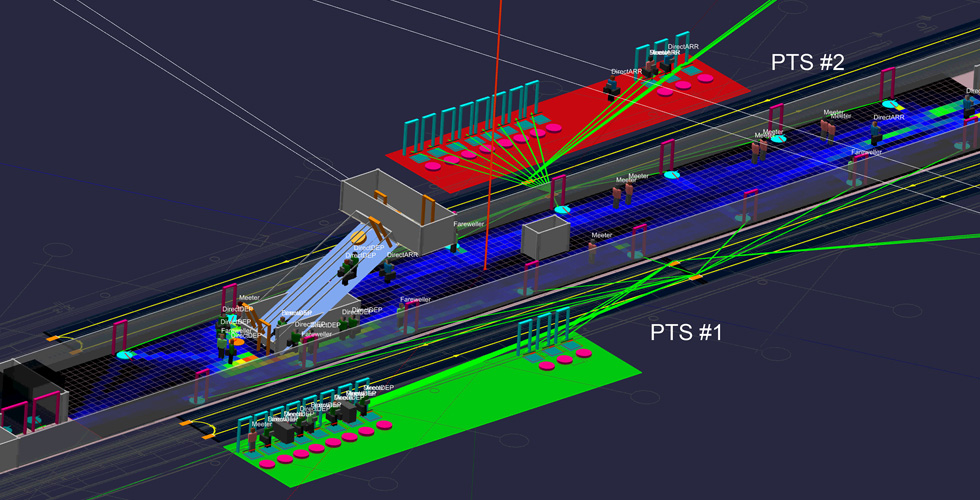 Where should check-in counters be located? How can passenger flows in the terminal be better managed? And what process or infrastructure adjustments will prevent passengers from queueing excessively at security checkpoints? The dynamic simulation software “CAST-Terminal” provides answers to questions like these and thus allows the optimization of operational processes at airports. Robert Brinkmann, expert in capacity planning, explains why amd.sigma uses the software for terminal planning.

Airlines and airports are under increasing pressure to cut costs due to strong competition and rising production costs. The expansion of airport infrastructure is investment-intensive and in many places only possible to a limited extent due to a lack of open spaces. On the other hand, it is comparatively cost saving to optimize processes and thus exploit existing potential. However, this first requires a precise analysis of existing capacities for current and future passenger loads. Only on this basis can it be assessed, on whether future traffic can be mapped in the existing infrastructure.

Static capacity models and considerations that focus on selected points in time such as peak loads quickly reach their limits. This is because these models only provide snapshots and usually have too little depth of analysis to answer questions about a system with time dependency. Dynamic simulation models are different: they make it possible to display and analyze terminal processes within defined time periods and intervals, for example changes in passenger loads over selected days.

By modeling terminal layouts, processes and passenger behavior, detailed passenger flows and the resulting loads on the infrastructure can be examined.

A demand assessment can also include the investigation and optimization of various allocation scenarios, such as check-in counters or baggage conveyors. Numerous analysis options make it possible to determine whether the desired quality standards, such as maximum waiting time or space availability per passenger, are met or not.

Since the beginning of 2020 amd.sigma has been successfully using dynamic simulation, thus expanding its own range of services in the field of dynamic demand determination, the creation and analysis of allocation scenarios as well as dynamic level of service analysis (LoS) and passenger flow optimization.